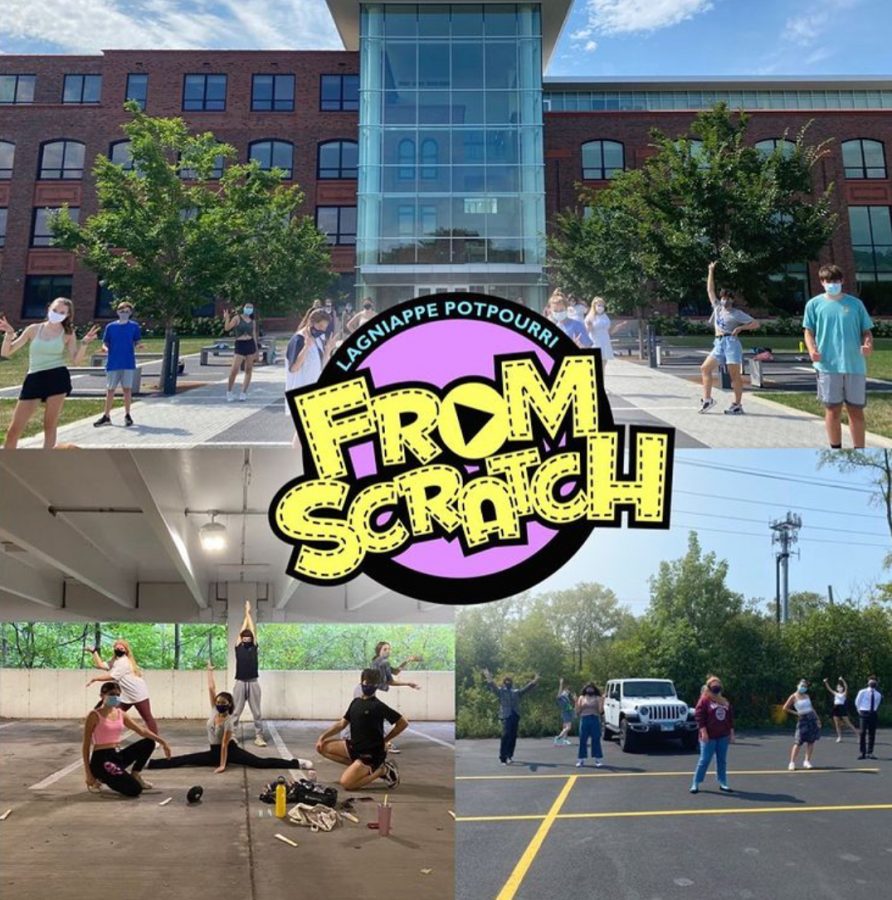 This year’s Lagniappe Potpourri was formatted differently than in previous years, but that didn’t stop the cast from putting on the annual student-produced show.

This was the 82nd year of putting on this production. The students had been working to put this together all summer and released the show in 3 separate episodes on Youtube. The cast and crew pulled off a hybrid version for this year’s show.

The show, called “Lagniappe Potpourri: From Scratch,” included numerous skits, songs and dances focused on “the highschool experience,” COVID-19 and other topics.

The sponsors, cast and crew worked tirelessly to pull off this show in a way that has never been done at New Trier.

The show was produced in a movie format. Songs were recorded and dances had to be filmed along with scenes before it was edited together.

Rehearsals had to be hybrid due to the virus, so some dances were learned/filmed over zoom, some in person, and the same went for the songs and scenes.

Songs were recorded and mashed together using a program called “Soundtrap”, which Isabelle Cowan, one of the Vocal Directors described as a “combination of Garageband and Google Docs.” In some songs, one person may have been able to record their sound live, but most of the songs were recorded separately and all the tapes had to be mixed together.

For the cast, learning music was difficult. Friedman said that it was difficult to learn how to use the sound mixing program.

“Learning how to use Soundrap was definitely difficult, but hearing the final product of everything mixed together was quite rewarding,” Friedman said.

She had to put her recording of the song into this new app, so that all the tracks could be mixed together.

“Learning the dance for the closer was the hardest for me because I was in the group learning it from home. It was a challenge focusing on what was being taught while it was being simultaneously taught to those in person,” Baron said.

Both Baron and Friedman were very pleased with how Lagniappe was run. Friedman thought, “they did a good job transitioning,” as this was New Trier’s first attempt at a hybrid activity. She said that it was a great, new experience.

Baron had similar thoughts on the production. He thought, “all the board members were really positive and made the experience as enjoyable as it could be.” He said that under the circumstances that this was the first thing New Trier had done hybrid, they really made the best out of it.

For the cast members, performing for a camera is not what they are used to. They’re used to performing live in front of an audience where you only get one shot at the performance.

“When filming”, Friedman said, “you had to be picky about what ended up being used.”

You had to treat every take as your live performance, she said, and couldn’t lose the energy.

Overall, Lagniappe appears to have been a big hit this year, even with some of the changes they had to make. The first episode has 2.8K views on YouTube, with the number of views decreasing with each episode, and the last one having 751 views.

Isabel Mangum, one of the producers of Lagniappe this year thinks this may be because of, “technology fatigue and the digital format.” She thinks that because everyone is spending so much time on their screens, people just really wanted to unplug.

Mangum said, “Having the episodes spaced out may have contributed to a decline as well.”

She doesn’t think that Lagniappe being digital caused it to lose anything, but she said it was definitely different than previous years. She thought that one of the strengths of the show was that the ensemble and the band members got to be featured much more than in past years.

“I do think that suspending disbelief is more difficult for an audience when a show is digital,” Mangum said.

She talked about how some things that usually would play well on stage don’t play well on screen, but is still very happy with how the show turned out.