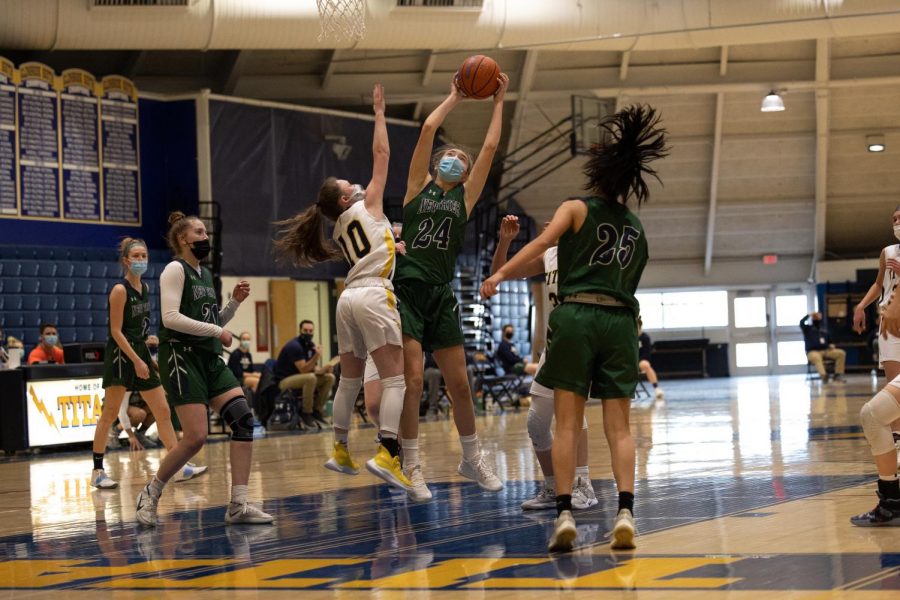 As New Trier advances its latest precautions while battling Covid, girls basketball  continues to thrive in spite of the challenges that come in a season hampered and sidelined by the virus. This raises the question of what exactly is happening with the girls basketball team? How are they able to manage maintaining adequate social distancing while allowing for optimal practice and exercise?

Basketball depends upon teamwork. So it becomes reasonable to wonder how exactly the group of girls are able to maintain their positions with new rules and health concerns.

Initially, the basketball season began their tryouts in mid November. However due to the spike of Covid cases, the tryouts were pushed back. Once those were completed, the team was able to get in two in-person practices. Anika Roche, a junior who plays on Varsity stated, “Basically we’re all wearing masks, [and] all spaced apart… We did all share basketballs, but we sanitized the balls which had touched our hands, so, you know it did feel actually really safe.”

Then they had to stop.

Since then, the team has practiced over Zoom while using a workout app known as MaxOne to train through the app’s coaching platform. Also, the team met to discuss important attributes of team cooperation. These have included respect, trust, and social injustice.

A few weeks ago, the girls on the team were able to meet with their coaches for thirty minute one-on-one sessions.

Finally, practices resumed. They held no scrimmaging or close contact. However, the girls were all excited because through their individual drills, they could play and exercise with each other. Marked areas of the floor kept them separated from one another. This helped them further build their confidence and communication as a team.

On January 29, the basketball season began with an astounding start. Their first contact practices required mask wearing and social distancing. The gym spaces were evenly separated, which allowed the girls to practice ball handling skills, as well as other stretches for some strenuous exercises like sprinting.

Regarding mask usage while performing such rigorous training, Hannah Schneiderman, a senior, said, “For some people, it is harder to run with a mask on— for example, girls who have asthma.” Although masks allow for the prevention of contagion through air particles, the restricted spacing caused by masks can allow for inadequate breathing–including for those with asthma and airflow obstruction.

Covid has also struck the team with Illinois’ strict rules. Nicole Fabish, another senior member on the team, said, “It is very unfair that Illinois and two other states are the only ones that haven’t had sports games.” Although practices have been ongoing— through Zoom meetings and individual workouts as well as recently introduced contact practices— Illinois has had a delayed start to their basketball season.

After games were scheduled, they had to take a pause due to community outbreaks of the virus. Ms. Teri Rodgers, the girls varsity basketball coach, said, “I think we have done a great job being as safe as possible. Wearing masks to me is the key mitigation factor, and our kids have done a great job of adhering to that.” She added that the pandemic has allowed the basketball team to recognize how important and valuable it is to cooperate, as well as appreciate one another during stressful times.

With this newfound hope, the girls basketball team will continue to practice, and have a strong, unyielding season amidst the challenges. With an unstoppable force, a resilient group of girls, and an incredibly motivating coach, New Trier’s Girls Basketball Team is going to steal the ball from Covid’s arms, and slam dunk their way into success. Go girls!