Covid Gave us a Year of Trends…

...and this is how they turned out. 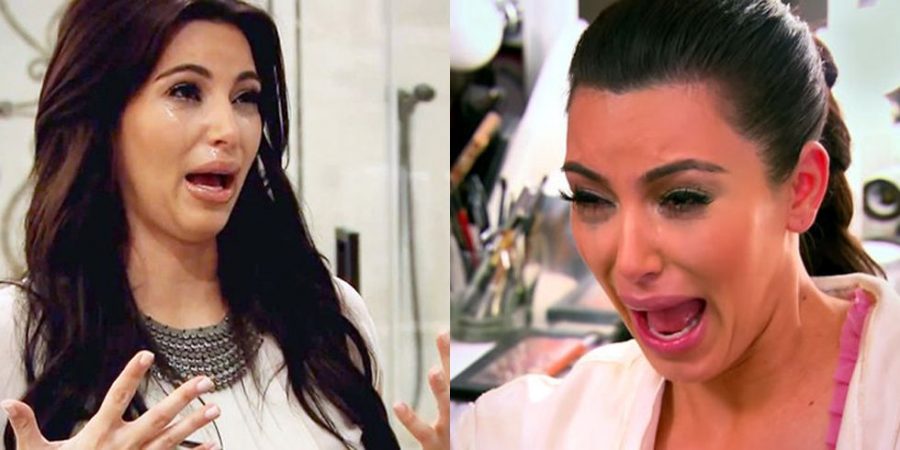 A short list of things that broke the internet from March 13th 2020 to March 13th 2021. It is now one entire year of coronavirus. Also known as, “the virus that influenced me to stay up more, and sleep in later.”

It was Thursday afternoon, and the minute before school got out, an administrator announced over the loudspeaker something along the lines of, “Students, please take home all school supplies, and all thethings you may need for the upcoming week.”

With everyone so confused about what Monday would look like, I was freaking out about how I was going to do school from home. I mean like…??? That Monday, TikTok was trending. And so were a few songs. Supalonely, by BENEE had taken us by storm the week before we got out of school. We all know the dance. Charli and Addison were popping off with those mildly saucy moves. Then it was Savage, by Megan Thee Stallion, and then again with the three million variations and remixes. Every other time I would swipe on TikTok I would see adance to that song. Fast forward to now, when I hear those, with the songs engraved in my brain, I get up and dance in my living room. Because where else am I going? It’s not like I can go to parties or anything. 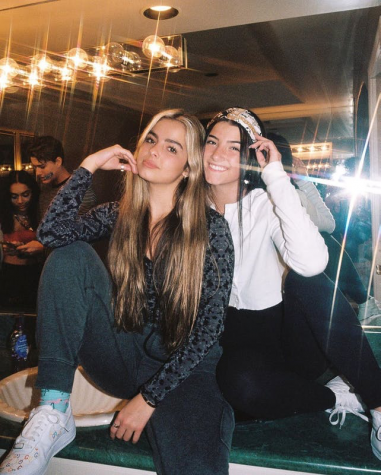 Speaking of parties, I spent a lot of time in the shower with my speaker and my imaginary strobe lights. I think it would be so cool to have strobe lights in the bathroom, brb-buying them rn. My parents wouldn’t let me go to any ‘’real parties” because, I’m a teen who lives in a pandemic.

Along with TikTok, came its recipes, hacks, tips, and shopping. My Revolve likes were slowly going up. Biker shorts got trendy, but I don’t think anyone but Princess Diana could pull them off. (There were also theories she is still alive. People have too much time on their hands.) Claw clips became internet sensations. They were so popular they could probably go on America’s Got Talent as inanimate objects, and win. This is how bored I’ve been. 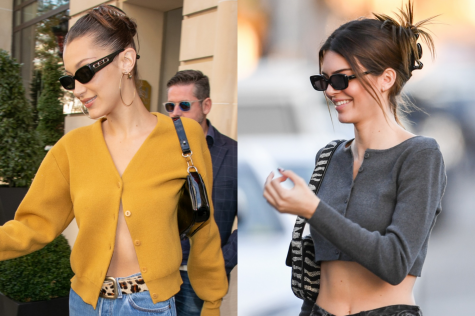 A more recent sensation, feta pasta. I tried the renowned feta pasta three ways. One time, the classic feta block with tomato and spaghetti. The second time I did with feta and spaghetti squash noodles, so good by the way, and much healthier than normal pasta. And last I tried the regular spaghetti with burrata. My favorite? The Buratta. It was heavenly, and I would make it 100 more times, but I would totally get sick of it. All my friends tried the feta pasta, and of course they all loved it. 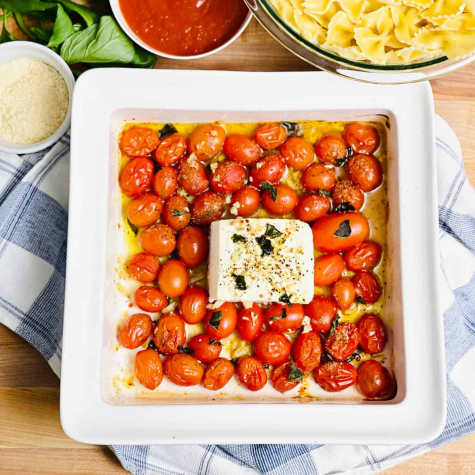 TikTok feta pasta recipe, that claimed to have made feta blocks become out of stock at grocery stores. Photo VIA Hello Yummy.

While in quarantine, my online shopping habits got much, much worse. I would add to cart. 24/7. It was always add to cart, and never buy because I don’t think a good fashion statement would be to wear a $3,000 pair of pants to my living room. It is unethical, and not fair to anyone’s bank account (Unless you are Kendall Jenner.)

I saw a ton of people create videos and lists of their favorite stores, so I decided to make my own and quickly had a couple hundred. It turned into a bigger thing, which now every time I see a cute new boutique or store, I add to the list. It is almost like shopping is my caffeine, which if you know me, it is. I get stuck on Revolve pretty much every night, and have built up quite the rewards star collection.

Anyways, the whipped coffee that everyone had to go and get the ingredients for was a big challenge. It was a fun challenge, but some celebrities posted that they still couldn’t get it right.

A lot of people, “got that bread” (peace out.) Banana bread and cloud bread broke the internet. Banana bread isn’t my favorite, and I haven’t tried cloud bread. I imagine the cloud bread is so light and fluffy you can just fall asleep in it. After waking up from your cloud bread nap, was either your 4pm family walk or watching Tiger King.

The question that strikes millions of Americans today is, “Did Carole Baskin really kill her husband?” Again, the world may never know. Before or after Tiger King, did you make snacks when you weren’t hungry too? Busted. 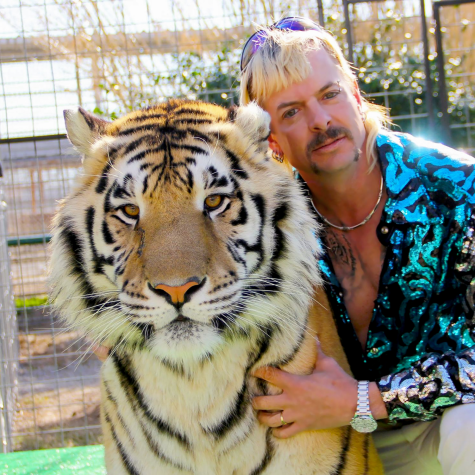 Joe Exotic posing with his pet tiger. Photo VIA The New York Times.

Those family walks everyone dreaded to go on, consisted of 1,000 excuses from your siblings about why they can’t go on that walk. Here are my favorite excuses.

“I have SO much homework! I don’t have enough time to complete that AND this stupid walk” (Invalid because you had barely any zooms and maybe not enough homework. If it even was still called homework.)
“I have a broken ankle!” (Yea you probably broke it while trying to do a tik tok dance only Charli D’amelio is capable of doing. Duh.)

Family walks were some of the worst moments of the day, but I am glad my parents made me because it has made me realize how lucky I am to have caring parents and a loving family. Cue the tears.

After being introduced to Zoom, it took only a few classes to pay less than 100% attention. I would get so distracted and be bored out of my mind. Then I got sick of Zoom, now I’m really sick of Zoom. But I do think it would be a good stock to invest in because so many people use it everyday. People get dressed up for countless events on top, and wear sweatpants and slippers on the bottom.

Sorority recruitment on TikTok has been widely celebrated because Matt James and Chris Harrison have made appearances. Of course for Matt James you have to look good. 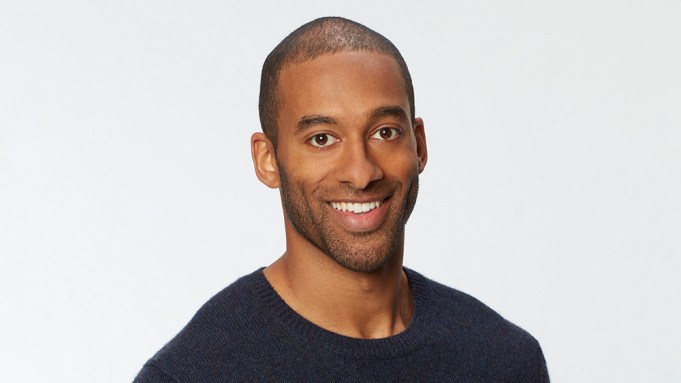 Matt James from season 25’s “The Bachelor”, where the drama filled house excited young adults across the country. Photo VIA Deadline.

Someone who really displayed the whole half-comfy/half-cute look was John Krasinski. He launched Some Good News which started as being a happy and fun thing to watch every week during this “unprecedented time.” Unprecedented, that’s a word I hate. As Holden Caulfield from The Catcher in the Rye would say, “it’s phony.” It really is.

It first started as a word principals and athletic directors would use to describe the virus, but now the word itself is truly unprecedented. I will never, I mean never, look at that word the same again.

Stocks like GameStop, received a lot of drama this year. Reddit forum users had the stock go up so much it was bad. I don’t really know a lot about it but please enlighten me in “for dummy 101” format.

Popular too, were The Queen’s Gambit, The Undoing, and Hamilton, since they put in on Disney +. All the words kept coming back from my Hamilton phase a few years ago.

“Hamilton” stars on stage. Photo VIA Consequence of Sound.

All in all, this past year was a social media, screen time, claw clip, biker short, TikTok kind of year. We know this pandemic will make the history books, which is crazy. I wonder if Charli D’Amelio or Addison Rae or any other TikTok stars would be in them.